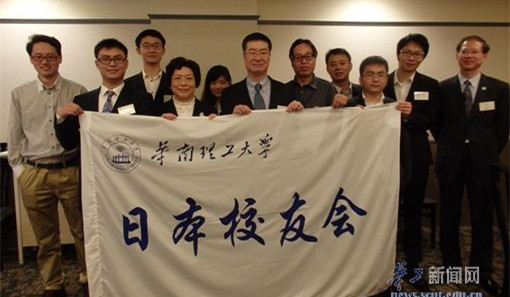 On November 7th,2015, the South China University of Technology Alumni Association of Japan (SCUTAAJ) has been formally established in Tokyo.
Representing SCUT, Liu Qijin, the Vice Chairperson of University Affairs Committee and the Executive Vice President of SCUT Alumni Association, attended the ceremony to witness the establishment of the new association.
Except for SCUT alumni, senior officers from other Chinese university alumni associations in Japan were also invited. Among them were representatives from Jinan University, Zhejiang University, Sun Yat-sen University, Xiamen University, Beijing Normal University, Tongji University and University of International Business and Economics.
the Regulation of SCUTAAJ was also passed. Wu Donghang was elected as the President of the association, when Chen Kui was elected as the Secretary General. Ren Zhen and Wang Wei were elected as the Vice Presidents, and Zhao Dian was elected as the Convener of the Alumni Branch in West Japan.
On behalf SCUT, Liu Qijin expressed her congratulations and best wishes to the alumni. She talked to the alumni on the recent developments of the university, particularly on the events of 2015 Alumni Day, which was held in November 14th.
She hoped that the alumni would visit their alma mater regularly in the future. They would be helpful for the current students and younger alumni to develop better lives, making contribution to the university and the Sino-Japan relationship.
Wu Donghang first shared his gratitude to the alma mater. He then showed his determination that together with other alumni's efforts, the association will thrive in its further stages of development.
During the ceremony, the alumni introduced their studies and careers to each other, and representatives from other Chinese university alumni association showed their sincere blessing to SCUTAAJ. More friendly activities are expected to be held in the future to strengthen the connections between them.
Chinese version by SCUT Alumni Association
Translated by Xu Peimu and Xu Fang
From the SCUT News Network