On November 14th, the 2015 Alumni Day of South China University of Technology (SCUT) invigorated the campus. About 6000 ,from more than 130 classes,and their families returned to their alma mater.
The air was filled with smiles, flags and joys of reunion. Even the sky, after days of cloudy and raining, was pleased to pour sunshine on the campus.
The Alumni Day was led by the performance of The Song of SCUT, followed by a series of chorus that used to be the alumni’s favorite songs: Graduate Song, Good Old Days, Love…The familiar lyrics brought them back to the younger ages, leading them to hum with the melody.
For Class 70175 (“701” was the code of electric power major, and “75” indicates the students enrolled in 1975), many of its alumni are over 60 years old, with silver hair on their head witnessing the lapse of time, while their affection to the School of Electric Power never fade away. 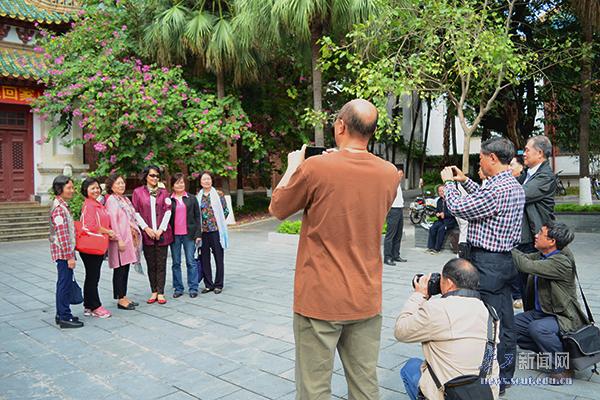 Alumni are taking photos in front of the building they used to study in.
“This building was the soul of our school,” this was said as they were taking pictures before Building No.9.
Yang Xu used to be a member of the class, who came to join the Alumni Day from California. This was the first time for him to visit the campus after he graduated. He was so surprised to see many unexpected changes: “My alma mater is now more advanced and more beautiful. Even though the outside looking of the campus is different, I can still find tracks of memories and my affection here.”
“When I was a student here, its name was still South China Institute of Technology, but look at it now -- a multi-disciplinary university!” said Xie Xiaoneng, an alumnus who enrolled at SCUT to study computer science in 1981.
Now he is quite successful in his career, as he often recalls the instructions from his tutor, Professor Chen Xingning at SCUT, taking his words as the guideline of his professional life: “Computer science is a subject with rapid knowledge upgrading. You should live and learn for the whole life.”
“That’s the drive to keep me learning till today. I have knowledge in nearly all kinds of disciplines,” he adds. 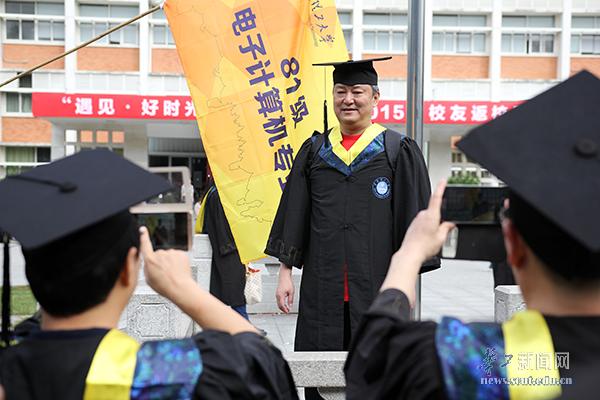 Once again, he wears bachelor's grown
Enrolled at SCUT’s Welding major in 1991, Huang Yuezhen is now a senior manager in a state-owned enterprise. Speaking of her college life, she was so delighted and proud:
“I was one of the student CPC members that entered the party quite early, and I used to be the chairman of the Student Union. The university gave me many opportunities to practice, teaching me on how to manage time and my personality, and how to cooperate with others.”
Representing her enterprise, Huang now often goes back to SCUT to recruit fresh graduates, who give her great impressions. “I like these young graduates,” she said. “They exhibit solid knowledge and skills in their specialty, and they learn quickly.”
In 2001, 41 students enrolled in the Sporting Class at School of Business Administration. Having won a great number of awards for SCUT in various sports games, they became a quite solid unity when they gradated. On this year’s Alumni Day, all of the 41 came back together, dressing their class kits, hugging and taking photos as they yelled their slogan: “We have the magic power!” 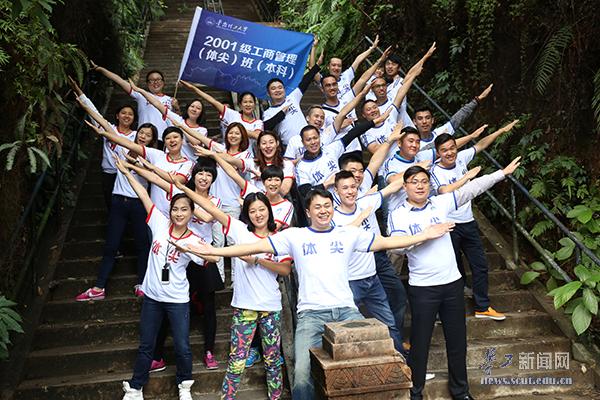 An overdue reunion of SBA Sporting Class after 10 years passed.
Ling, their class tutor, was also present and excited about the reunion: “When they were students, it was not easy to see the whole class getting together because everyone was busy with different trainings and matches. That’s why it is beyond our expectation that this time we are all here, and we feel more united and closer with each other.”
During the celebration, a series of activities were held in the main venue of the university and sub-venues of schools, such as a picture exhibition of alumni called “Meet with the Good Time”, and a musical performance called “Sing for Love”.
This is the third time for SCUT held Alumni Day activities as an important platform for building alumni culture and promoting alumni donation culture. It is also crucial for the people of SCUT to inherit the history and spirits of the university, meanwhile strengthening the connection with the alumni, as well as providing better services to them.
Chiense version by University News Center
Translated by Xu Peimu and Wu Lizhen
Edited by Xu Peimu
From the SCUT News Network