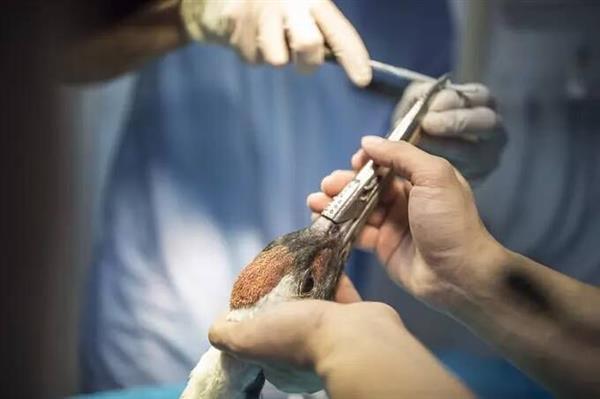 Recently, SCUT worked with its partners to rescue an injured red-crown crane with a 3D printed beak implant made by a lab in the university.
Known for its signature patch of bright red skin, the red-crowned crane is one of the rarest crane species in the world and is often recognized as a symbol of good luck.
Lili, a red-crowned crane from a zoo in Guangzhou, found herself unable to eat after breaking her upper beak in a fight with other birds. The initial surgical treatment appeared to be causing a severe infection and even necrosis of the beak. After treating the infection, doctors realized they had to do more to help the young six-year-old bird survive, especially as red-crowned cranes can live up to 50 or 60 years.
The injured crane was sent to the Leader Animal Hospital, where the doctors decided to reach out to the Guangzhou Yang Ming Technology Company, which specializes in 3D printing plastic molds, and the Additive Manufacturing laboratory at SCUT.
During the next month, doctors and scientists from the hospital, the company and the university worked together on developing the best design for the red-crowned crane’s beak by studying the species' anatomy and by creating a number of prototypes for the new beak. After testing seven versions of the beak prosthetic made from plastic, the team reached iteration for the final design.
The final model was then sent to the lab at SCUT, which was capable of 3D printing the titanium beak using state-of-the-art machines. A week later, an artificial beak was finished and sent back to the hospital.
With Lili sedated, the doctors were able to successfully implant the new 3D printed beak within just 30 minutes. When the bird awoke after the surgery, the doctors presented her with a bucket of fish, which after a few tries, she was able to catch and eat by herself. A nurse even joked that with her new titanium beak, no birds would ever try to fight Lili again.
This was the first successful case in China to rescue a red-crowned crane using a 3D printed implant, which set one more example of applying 3D printing technologies in animal rescue and aid. Within the past year, a number of birds have been fortunate enough to receive 3D printed beak implants. In February, a Brazilian parrot was the first to receive a 3D printed titanium beak, but several other birds have also been implanted with plastic prosthetics.
Sources from 3Ders.org and Xinhua News
Compiled and translated by Xu Peimu
Edited by Xu Peimu
From the SCUT News Network