Reposted from nanotechweb.org
Original article by Anna Demming
OLEDs are thinner, lighter and more flexible than their inorganic counterparts. However they are also particularly vulnerable to contamination from gases and water vapour in the air, which can greatly impinge on their performance.
However, researchers at SCUT have now demonstrated a protective laminate for high-performance OLEDs that decreases the transmission of water vapour and other gases into the device by around an order of magnitude.
“No one has used MgO for OLED encapsulation before,” says Lei Ying, an SCUT researcher, after listing the various inorganic materials that have been considered. Yet as the SCUT researchers tell nanotechweb.org, MgO has a number of advantages: a low refractive index giving high transmittance, wide bandgap, high dielectric constant, high chemical stability and the lack of UV irradiation treatment requirements. It is also cheap, commercially available, and with the new protocol reported in Nanotechnology, it is readily deposited on an Al2O3 coated device.
Engineers have traditionally used Al2O3 as a protective coating as it is quite successful for blocking transmission of damaging water vapour and other gases. However OLEDs’ extreme susceptibility to water-vapour and gas damage has spurred researchers to investigate ways of developing improved protective laminates by combining with other inorganic semiconductors. In fact MgO’s string of advantages has already encouraged attempts to add it to enhance protective Al2O3 layers, but without success. “Previously people tried to make MgO layers using Mg(Cp)2,” explains Ying. “But the processing temperature needed is as high as 300 °C - for thin film encapsulation we need very low temperatures like 80 °C, so this approach cannot be used for thin film encapsulation.”
Led by Junbiao Peng, professor in the School of Materials Science and Engineering at SCUT, the researchers developed a protocol to successfully deposit MgO layer by layer at temperatures of just 80 °C. The OLED was then protected without any signs of damage for up to 600 hours in an extreme environment of 60 °C and 100% humidity, extending the lifetime of the device by around an order of magnitude. What is more they identified the critical thickness below and above which, the MgO layer is not effective. 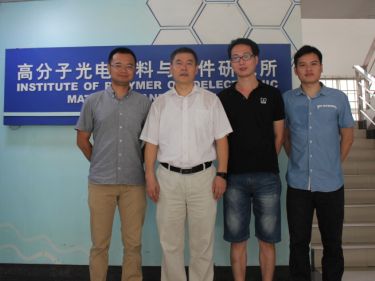 The SCUT research team
Not too thick, not too thin
The researchers deposited the MgO layer by layer using atomic layer deposition, with the precursor Mg(CpMe)2 along with water and tetramethylammonium (TMA). The ligands of Mg(CpMe)2 evaporate at around 70 °C as opposed to the 150-200 °C needed for Mg(Cp)2, so the MgO can be deposited at much lower temperatures.
While Al2O3 protects the OLED by blocking the transmission of water vapour, MgO enhances this protection by absorbing water vapour so that it does not reach the device. This means there is a minimum thickness of 1 nm below which the MgO layer will not be uniform, and there will not be enough of it to effectively absorb water vapour.
In addition the MgO layer must be amorphous as water molecules can penetrate between the domains of crystalline MgO films. The researchers found that above 1 nm the layer forms in the crystalline phase; 1 nm is the critical MgO layer thickness for effectively enhancing the protective behaviour of the coating.
Next steps
The SCUT researchers suggest that the protective laminate technique may also be useful for organic photovoltaics, organic light-emitting field-effect transistors and other printed circuits. Because OLEDs have a particularly low tolerance to water vapour and gas exposure, success of the laminate with these devices suggests it will more than suffice for others. The next steps for the team however will be to extend the work with OLEDs. “The most impressive thing for flexible OLEDs is the large area,” says Ying. “However, if you can make this laminate for a small area it does not necessarily mean you can make it work for a large area device. So what we’re going to do is see if we can transfer the technology to large-area devices.”
Edited by Xu Peimu
From the SCUT News Network