International programs thrive, as SCUT to take 6,300 freshmen in 2017 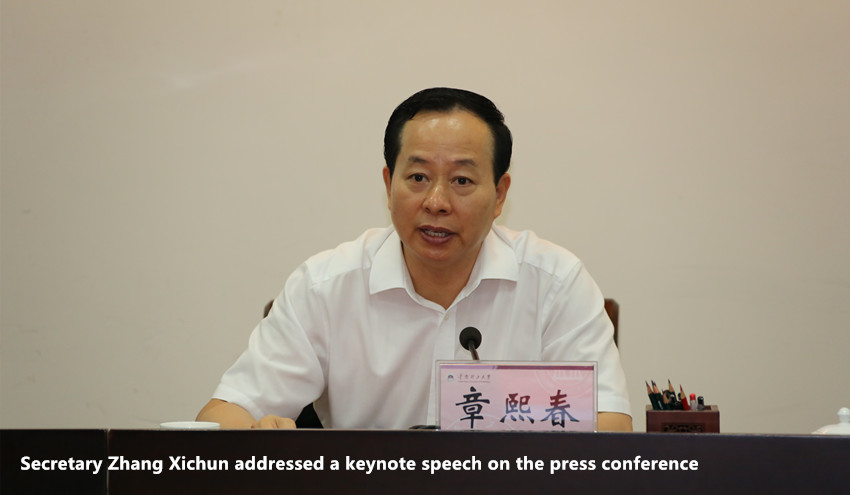 SCUT plans to enroll 6,300 fresh undergraduates this autumn, as advanced schemes for training high-performance students and international joint programs will continue to expand in scale and scope.
The university held a press conference on June 8, the second day of China’s National College Entrance Examination (NCEE), to announce its undergraduate recruitment plan of the academic year 2017/2018, when Zhang Xichun, Secretary of the CPC SCUT Committee, addressed a keynote speech.
Zhang Xichun praised that the rapid development of SCUT has benefited from “the right timing” of the nation’s strategic layout, “the right place” of Guangdong as a province of reform and opening, as well as the “the right people” of all communities that offered great supports to SCUT’s efforts in higher education.
Qiu Xueqing, Vice President of SCUT, responded to media questions in the presence of 26 national and local news agencies. Key concerns of the media included the recruitment volume, course settings, international joint programs, and policies of scholarships and financial aids.
The university will be hosting a campus open day at the Wushan Campus on June 25 to provide consultation to prospective students, while the Graduation Ceremony of 2017 will also be held on the same day.
● Improvement in course settings
The general scale of this year’s recruitment will maintain the same level as last year, but the admission quota allocated to students from Guangdong province will slightly increase.
Course settings are optimized to meet students’ needs on some of the most popular majors in the province, including electrical engineering and automation, information engineering, mechanical engineering, civil engineering and transportation, and finance.
In addition to SCUT’s nine Innovation Classes, which are customized schemes of training high-performance students for intensive research abilities, the Yan Jici Excellence Class of Applied Physics will be this year added as a new arrival. The class will be run by SCUT and two sub-institutes of the Chinese Academy of Sciences, planning to take 25 students in its first enrollment.
● New joint programs with the University of Western Australia
The dual-degree programs co-offered by SCUT and overseas universities will continue to grow, as three Sino-Australia Classes with the University of Western Australia (UWA) will start recruiting students in this autumn.
Students are supposed to spend three years at SCUT and then two years at UWA, studying electrical engineering and automation, software engineering, or environmental engineering.
The first phase at SCUT will be planned by both universities, with some key professional courses and liberal arts courses taught in English. After finishing the curricula in Australia, qualified graduates will receive a bachelor's degree from SCUT and a master's degree from UWA.
Similar dual-degree programs were set up in previous years and made productive progress with some of the world’s top universities in the US, the UK, Australia, Canada, France and Italy.
● The Guangzhou International Campus
The School of Microelectronics and the International School of Advanced Materials will be the first two schools to enroll students for SCUT’s Guangzhou International Campus this September.
The agreement of building the new campus, undertaken by SCUT, the Ministry of Education, the Guangdong provincial government, and the Guangzhou municipal government, was signed in Beijing this March to advance high-level education and scientific research in ten engineering fields, covering 20 to 30 majors.
The campus will be located close to the Guangzhou Higher Education Mega Center in the Panyu District. It will be built on an area of 1,650 mus (110 hectares), receiving an estimated investment of 20 billion yuan.
Except for the above mentioned two schools, eight others are being planned, including schools of life science and biological manufacturing, big data and cyber space security, artificial intelligence and advanced manufacturing, green architecture and smart city, ecology and environment, smart grid and new energy, quantum and optical communication engineering, and marine science and engineering.
This year is also the first time for SCUT's newly-established School of Microelectronics to receive students. 120 freshmen will be admitted to study electronic science and technology, a major that in the future could be exceptionally competitive in the province's empolyment market.
China currently holds the world’s biggest circuit board market, with a number of circuit board manufacturers in Guangzhou and Shenzhen moving into leading positions of the global market. The development is creating a huge demand in Guangdong province's electronic information industry for advanced technologies and well-trained specialists, while the set up of SCUT’s School of Microelectronics was expected to meet this demand.
Based on materials from the Admission Office of SCUT
Written and edited by Xu Peimu
From the SCUT News Network