Commencement 2017: over 8,000 students graduate from SCUT in June 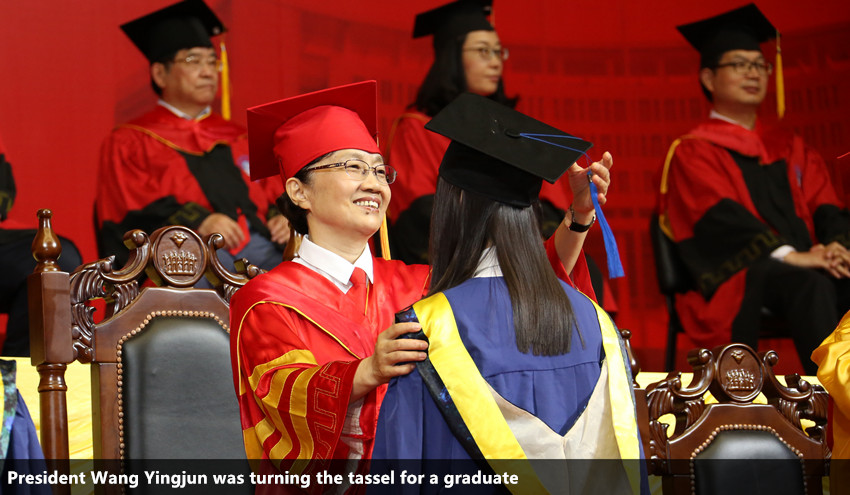 It was the morning of June 25 at the Haili Sports and Recreational Center, where the second half of the 2017 Commencement started with Back Then to You, an original song written by a SCUT’s student musical band to celebrate graduation. The moment President Wang Yingjun and academic representatives of each faculty stepped into the venue, the air was suddenly ignited by applause and cheers.
Two hours earlier, the first half of the commencement took place in the same hall, when Secretary Zhang Xichun presented certificates of honor to students that volunteered to do their service in the western China after graduation, and President Wang Yingjun addressed a commencement speech to the graduates, encouraging them to “embrace an age of change with the strength of your conviction”.
From June 25 to 27, five sessions of degree awarding ceremonies were held in the Wushan Campus and the University Town Campus. Those who were present to witness the solemn hours were Professor Wang Yingjun, Chair of the Degree Committee, Professor Qiu Xueqing, Deputy Chair of the committee, Professor Zhu Min and Professor Dang Zhi, members of the committee, as well as academic representatives of each faculty and student parents.
Up till June 27, 4,716 undergraduate students, 3,431 Master’s students and 269 PhD students were granted degrees. Except for those attended the event, there were also over 6,000 people watched the commencement on June 25 via online streaming.
Chen Jiaqi, former Chair of SCUT's Student Association of Career Development, is now graduating from the School of Chemistry and Chemical Engineering. “I met a better self in my college life,” tears were rolling in her eyes, “SCUT taught me to be a valuable person before I leave the campus.”
From the University Town to Wushan, Zhang Yijun spent nine years at SCUT since his freshman year, and has now received a PhD degree from the School of Mechanical and Automotive Engineering. He still recalls the moment when classmates of his undergraduate class and Master’s class left the campus, and it is now his turn to say goodbye, looking forward to starting a teacher’s career after graduation.
Among all the 8,000 graduates, over a hundred were international students. “A beautiful encounter and an unforgettable memory.” That’s how Chawanrat Phaibunsiri, a student from Thailand, described her days at SCUT. She used to be a class leader who organized campus events for students from all over the world. “I like the Chinese language so much,” she said, “I will be looking for a career in China after I graduate.”
Source from the University News Center
Translated and edited by Xu Peimu
From the SCUT News Network