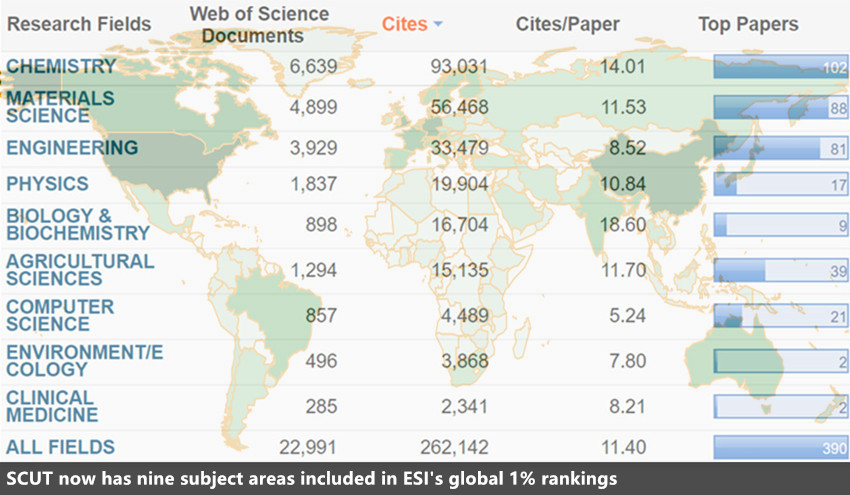 According to the latest update of Clarivate Analytics’s Essential Science Indicators (ESI) database, the research performance and impact of SCUT’s clinical medicine was ranked within the world’s leading 1% for the first time.
The update was released on November 9, presenting statistical results that covered a 10-year plus 8-month period, from January 2007 to August 2017, during which researchers of SCUT published 285 top papers in clinical medicine on ESI’s listed journals, while 2,341 citation times were recorded.
This is SCUT’s ninth subject area that enters ESI’s worldwide rankings. The other eight are engineering, materials science, and chemistry placed within the global top 1‰, and agricultural sciences, biology and biochemistry, physics, computer science, and environment and ecology within the global 1%.
After SCUT was selected in the state’s Double World Class project in September, this is one more significant step for the university to continue its endeavor to elevate some of its best fields of study to a world class level.
Developed by Clarivate Analytics, which was formerly the Intellectual Property and Science business of Thomson Reuters, the ESI database is a compilation of science trend statistics drawn from more than 10 million articles in more than 12,000 journals from around the world. It is a primary benchmark tool for evaluating research performances and impacts of universities and research institutions, as well as countries and regions.
Up till now, SCUT had 22,991 papers published on ESI’s listed journals, with citation times up to 262,142, putting SCUT at the 449th place among all the 5,620 institutions in the global 1% lists.
● An extraordinary progress in developing medical sciences
During recent years, SCUT has been building medical sciences as a key field by leveraging its strong points in science and engineering, and combining medicine and engineering to meet demands of emerging industries, such as life and health care, or biological pharmacy.
SCUT’s School of Medicine was co-established with the Guangdong General Hospital in 2014, and was built upon a robust foundation fabricated by SCUT’s rich experience and former achievements in medical related fields including new medical materials, biomedical devices, tissue engineering, medical image and information, biological pharmacy, and genomics.
In a short three-year period, the new school assembled a high profile faculty team consisting of receivers of the National Science Fund for Distinguished Young Scholars, Changjiang Scholars, and 973 Project Chief Scientists, while it forged an integrated educational system that provides students with undergraduate, master’s, and PhD programs.
In the meantime, three top medical facilities in Guangzhou were signed as SCUT’s affiliated hospitals including the Guangdong General Hospital, the Guangzhou Frist People’s Hospital, and Affiliated Tianhe Hospital.
All these efforts helped build a featured field of study that is research-intensive, shows global vision, and functions as a complex whole combining student teaching, medical services, and scientific research.
Source from the Office of Development Strategy and Planning
Translated by Xu Peimu
Edited by Xu Peimu and Cheng Yu
From the SCUT News Network