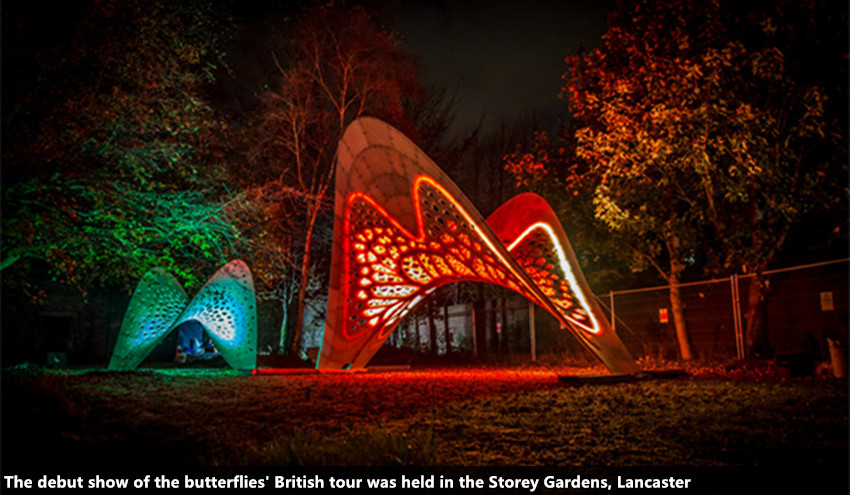 Butterfly Transformation, the world’s largest 3D printed butterflies and an artistic work created by the Architecture Design and Research Institute (ADRI) of SCUT, has set out for an international tour last month and landed in Great Britain with their arresting appearances.
The butterflies, having more than 100 light changing modes, were created by the ADRI’s 4D Dreamworks, a research team instructed by Professor He Jingtang, who is a prestigious Chinese architect and well-known for designing the Shanghai Expo Museum.
The larger butterfly measures 6.6 x 5.8 x 4.5 meters and the smaller ones are 3.7 x 3 x 3 meters. They first appeared at the Guangzhou International Light Festival in November 2016, and are now travelling to Britain on invitations of local cities, the local Confucius Institute and the University of Manchester.
The original design of Butterfly Transformation symbolized the history and development of Guangzhou, which, being a major commercial port with over two thousand years of history, has been transforming its outlook and culture from time to time.
After the butterflies’ debut show in Guangzhou, it took the designers over half a year to revise and upgrade the work, and they then altered its theme from “Guangzhou’s transformation” to “China’s transformation”, which better fitted the scope of an international tour.
The first stop of the tour was Lancaster. The butterflies were featured on Up Light Lancaster, a festival of light, art and fireworks that took place from November 3 to 4, when some of the most well-known Chinese songs, such as The Butterfly Lovers and Jasmine Flower, were played around the 3D printed artwork. The air was filled with the beauty of traditional Chinese culture, which combined the magic of modern craftwork and state-of-art technology.
They then arrived at Millennium Square of Sheffield on November 19, now being exhibited as a main scene of the city’s Christmas Light Festival, and will stay until January 3, 2018. Senior Engineer Su Chaohao and Dr. Lin Kangqiang, two chief engineers of the artwork, were invited to attend the Christmas light switch-on ceremony, and shared their idea of design when interviewed by the local media.
“Every time the butterflies spread the wings, it becomes a new transformation of ourselves,” they said.
This visit to Britain is an opportunity for the people of SCUT to demonstrate one of their latest academic accomplishments, a fruit of coordination between the university and the public, in particular on an international stage.
It is also worth to mention that the UK-China diplomatic relationship is celebrating its 45th anniversary in 2017, which makes the butterflies a sign of the friendship between UK and China, and a cultural envoy of China’s Belt and Road Initiative.
The butterflies are giving their third appearance in the University of Manchester from January 15 to 25, 2018, and will then move to Hong Kong for further exhibitions.
Source from 4D Dreamworks and The Sheffield Stream
Translated and written by Xu Peimu
Edited by Xu Peimu and Cheng Yu
From the SCUT News Network