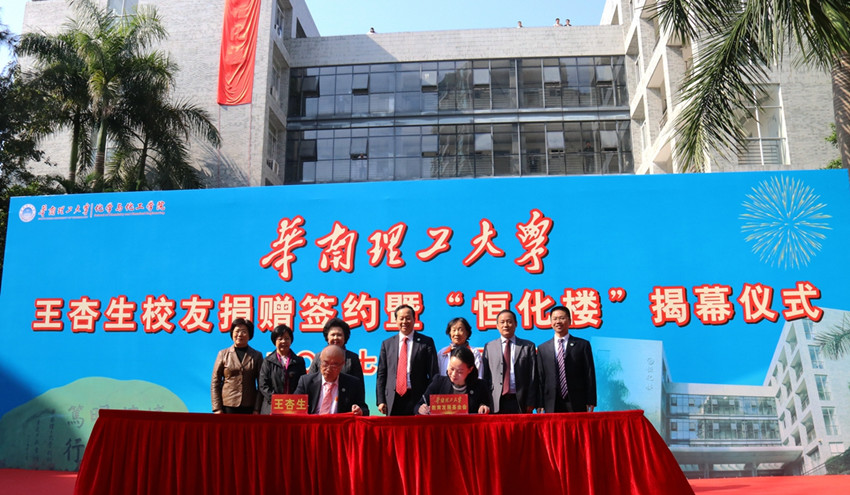 The No.16 Building of SCUT’s Wushan Campus is now named Heng Hua House to honor SCUT’s alumnus Wang Xingsheng, who last week donated eight million yuan to boost the development of his alma mater.
The unveiling ceremony for the new plaque of the building was celebrated on December 8, when Zhang Xichun, Secretary of the CPC SCUT Committee, on behalf of the university, accepted the donation from Wang Xingsheng, President of the Lishizhong Tyre Group in Thailand.
Distinguished guests of the ceremony also included Liu Qijin and Tao Shaojing, Deputy Secretaries of the CPC SCUT Committee, and Wu Ruizhu, Wang Xingsheng’s wife, as well as former classmates of Wang Xingsheng and representatives of SCUT’s faculty and students.
Wang Xingsheng, an ethnic Chinese and Thailand citizen, was admitted to the South China Institute of Technology (SCIT, predecessor of SCUT) in 1963 to study chemical engineering, using the name Wang Hengsheng at the time.
He returned to Thailand in 1972 after graduating from SCIT with merit in 1968, and then became the founder of multiple businesses that made great contributions to the chemical and tyre industries in Thailand.
He is also a philanthropist who seeks to promote public services including education, medical care, and public health by generous donations. Over the years, he has been following the development of SCUT and made donations several times. The No.16 Building was named “Heng Hua” by borrowing “Heng”, which means eternity in Chinese, from his former name, while “Hua” means chemistry in Chinese.
Source from the School of Chemistry and Chemical Engineering
Translated by Xu Peimu
Edited by Xu Peimu and Deng Langchu
From the SCUT News Network