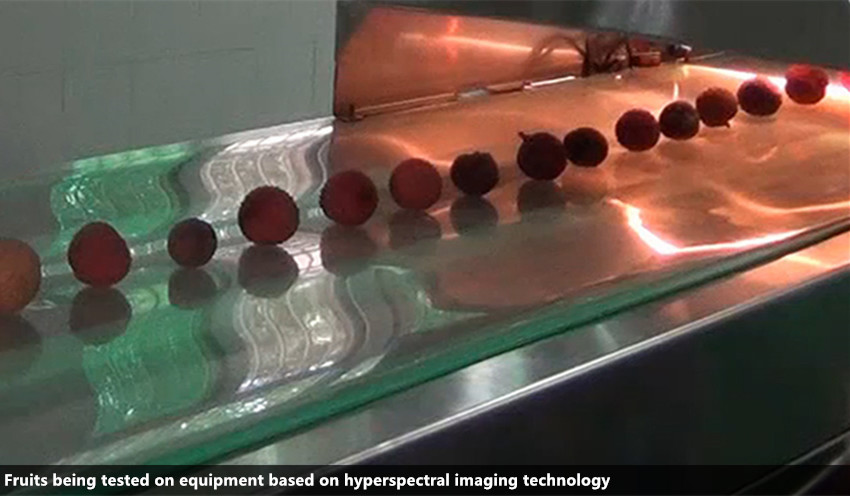 By using hyperspectral imaging technology, scientists at SCUT have created a new vision of testing food safety and quality in a rapid and non-destructive way.
At China’s 22nd National Invention Exhibition that was held in Foshan last month, this research project, titled "hyperspectral computer imaging technology and equipment for rapid and non-destructive food testing", was awarded the Golden Prize for Best Projects of the Creative Founder Awards, the highest national honour for inventors in China.
The project was finished by a research team led by Professor Da-wen Sun at SCUT’s School of Food Science and Engineering.
Food quality and safety are closely linked with public health and are core issues in China’s latest development strategy. Existing food testing technologies mainly rely on chemical analysis methods, which require a lot of time, manpower and material resources, and cannot provide on-line and real-time testing.
Meanwhile, due to the complex composition of different foods, which means large differences in physical, chemical and biological characteristics, scientists are facing great challenges when trying to develop equipment and methods for food testing.
Hyperspectral imaging (HSI) is a non-destructive testing technique that is able to merge the chemical information from spectrums and the apparent information from images. It is a green technology that can simultaneously measure and analyse multiple objects in real time without causing damage or pollution to foods, and it requires no pre-treatment.
During the past five years, the application research of using HIS technology in food non-destructive testing has maintained a high popularity around the globe, involving participation of universities, enterprises and research institutes in the US, Europe and the Asia-Pacific region.
However, a common issue among these efforts is the testing equipment usually requires highly on the initial state of foods and shows poor applicability under different circumstances.
Now Da-wen Sun’s team has broken the ice. Multiple portable devices were designed to perform process control in food production, for examples, testing nutritional ingredients of vegetables and fruits, taking hyperspectral pictures of foods, sorting fresh jujubes, or classifying meat products.
The technology has been delivered for use in a dozen of enterprises in Zhejiang, Guangdong, Ningxia, and Hunan provinces. While helping increase the volume and efficiency of vegetables and fruits production, it is a significant measure for food quality control and monitoring for China’s food industry.
Professor Da-Wen Sun is a world reputed scientist of food engineering. He is Member of the Academy of Europe and Member of the Royal Irish Academy. He is also the founding president of the International Academy of Agricultural and Biosystems Engineering (iAABE) and Honorary President of International Commission of Agricultural and Biosystems Engineering (CIGR).
Source from the School of Food Science and Engineering
Translated by Xu Peimu
Edited by Xu Peimu and Deng Langchu
From the SCUT News Network