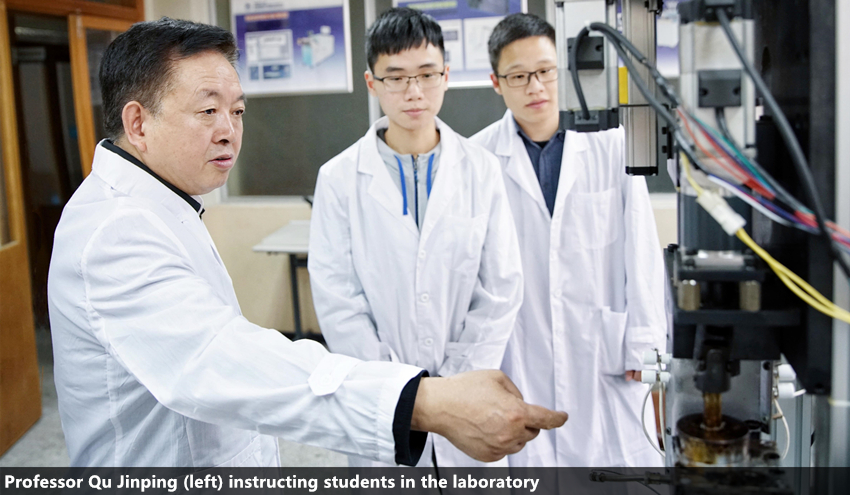 The CPC Guangdong Committee and the Guangdong Provincial Government last week announced the 2017 Guangdong Science and Technology Awards (GDSTA). SCUT’s professor Qu Jinping was granted the Prize for Outstanding Contribution, while other 24 research projects of SCUT were also commended by the government.
This is the third year in a row that faculty members of SCUT have received the Prize for Outstanding Contribution of the GDSTA, which is recognized as Guangdong province’s highest individual honor in science and technology.
Qu Jinping, an SCUT alumnus and a former Vice President of SCUT from 1998 to 2007, is currently a professor at SCUT’s School of Mechanical & Automotive Engineering and a member of the Chinese Academy of Engineering. He is a prestigious specialist in polymer material molding, and an innovator who has made a major contribution to plastics industry and plastic processing machinery industry.
● An urgent need in China’s plastics industry
Plastics are massively used in various industrial fields ranging from aerospace and transportation to home appliances and everyday commodities. In 2015, China’s output value of plastics industry exceeded 2,300 billion yuan, a number that put the country on the No. 1 seat around the globe.
However, the efficiency of China’s plastics processing does not match its volume. Its development has long been restricted by some worsening problems such as high energy consumption, oil shortage, and pollution. The country is in an urgent need of new technologies that can save energy and reduce raw material consumption.
That is what Qu Jinping and his team have been developing for the last three decades. Because of their efforts, breakthrough technologies that changed the philosophy of traditional processing were developed to help China’s plastics industry transform and upgrade.
● Three undertakings for a lifetime
“Speaking of science, I would like to invent new ways rather than to follow others who came before me,” Qu Jinping, 61-year old, said in a clear and rich tone, “I have only been doing three things in my lifetime.”
The first thing he meant was inventing a technique called “dynamic processing” for reducing energy consumption. It is known that the screw, a vital part of plastics processing, could only spin using traditional techniques, but Qu Jinping was the first one who introduced the mechanical vibration force field into polymer processing, which, in popular words, enabled the screw to spin and vibrate, and thus to save energy.
The state-of-the-art technology was awarded a number of major prizes, including the second prize of State Technological Invention Awards in 1997, the gold prize of the China Patent Invention Awards in 1997, and the second prize of the State Scientific and Technological Progress Awards in 2006.
The second undertaking of Qu Jinping was that he introduced a technique called “extensional deformation” to enhance the mass and heat transfer efficiency during plastic processing. Instead of using the traditional method of “swearing flow”, which may cause damage to the macromolecules of the material during processing, he proposed “elongation flow” that can process polymer materials without compromising the integrity of macromolecules.
His invention was disruptive to the traditional processing method because it massively reduced time and energy consumption, saved raw materials, and preserved the environment. The technology again led across the world, and received the gold prize of the China Patent Invention Awards in 2014, and the State Scientific and Technological Progress Awards in 2015.
The third thing, which Qu Jinping is still working on right now, is the most important part: putting the inventions into use. He and his team have developed many types of novel plastic processing equipment that are designed based on the above theories of “dynamic processing” and "elongation deformation”.
One application that has been widely used, for instance in Xinjiang, is to contain soil pollution caused by agricultural films. With the help of the new technology, the durability of films has been greatly enhanced, and it is now feasible to recycle whole pieces of films after a growth cycle of plants.
However, from Qu Jinping’s point of view, he and his colleagues still have a long way to go. The amount of polymer products and polymer processing equipment produced by China remains at the top of the world, while the country’s technology in this field is still far behind developed countries. Qu Jinping and his team are now on the mission of speeding up the progress of technology transfer, looking forward to a future that will create more value for the economy and communities of China, and of the world.
Based on materials from The Southern Daily, and SCUT’s National Engineering Research Center of Novel Equipment for Polymer Processing
Translated and compiled by Xu Peimu
Edited by Xu Peimu and Deng Langchu
From the SCUT News Network