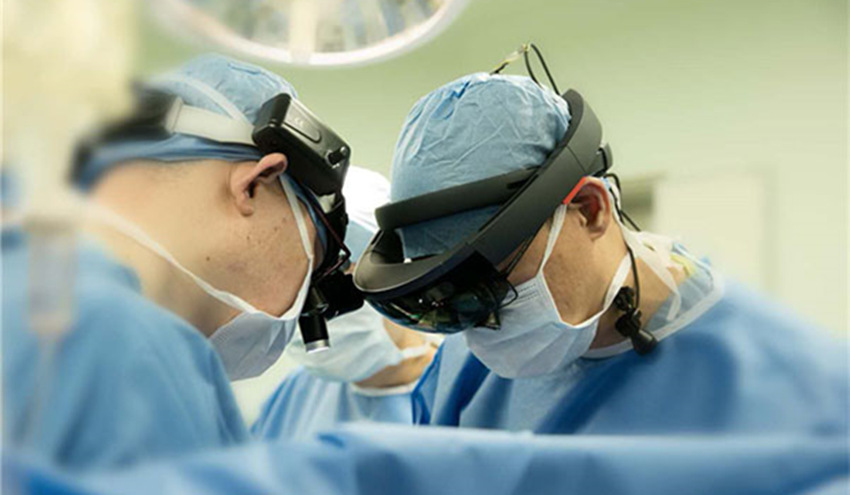 The medical staff of SCUT's Affiliated Guangdong General Hospital (GGH) has successfully operated the world's first example of treating complex congenital heart disease (CHD) with a surgery using mixed reality (MR) technology.
The case is significant for developing advanced measures of treating CHD in China, meaning a series of high-end technologies involving 3D printing, MR, and virtual reality can now be integrated and used in clinical treatment.
MR techniques, by creating a 3D image of the patient's heart, helped doctors identify the exact location of the disease and make an effective plan before the surgery, and then guided doctors with MR glasses during the surgery.
A 3D-printed model of the heart was also made before the surgery to give doctors a preview of what they would be dealing with, and help the patient’s family members understand the treatment with a concrete image.
Zhuang Jian, Dean of SCUT's School of Medicine and Director of the GGH, said in an interview with Guangdong TV that such a kind of medical intervention, which combined a number of frontier technologies, had been rarely used before in treating complex CHD patients.
"A traditional manner is to open the heart and identify the problem during the surgery, which costs a lot of time," he said, "but as we all know, heart surgeries, especially those that require extracorporeal circulation, should last as shortly as possible to ensure safety."
"If a clear judgement can be made before the surgery, we can probe the heart very quickly after opening it, and then go directly to what should be done."
The estimated duration of a traditional surgery treating complex CHD can be at least ten hours, but the case recently operated at the GGH only took less than five hours, while it stood a better chance of producing good results and a lower chance of causing complications, with no additional hospital bills being generated.
Founded in 1946, the GGH is one of the largest general hospitals in China. It started from 2004 in Guangdong to build a network of CHD control and prevention, which now covers all the 21 cities of the province, and has taken effective measures to contain the disease from the very beginning.
To watch the full story run by Guangdong TV (in Chinese), please follow this link:
http://www.scut.edu.cn/new/2018/0331/c214a8291/page.htm
Source from Guangdong TV
Translated by Xu Peimu
Edited by Xu Peimu and Cheng Yu
From the SCUT News Network