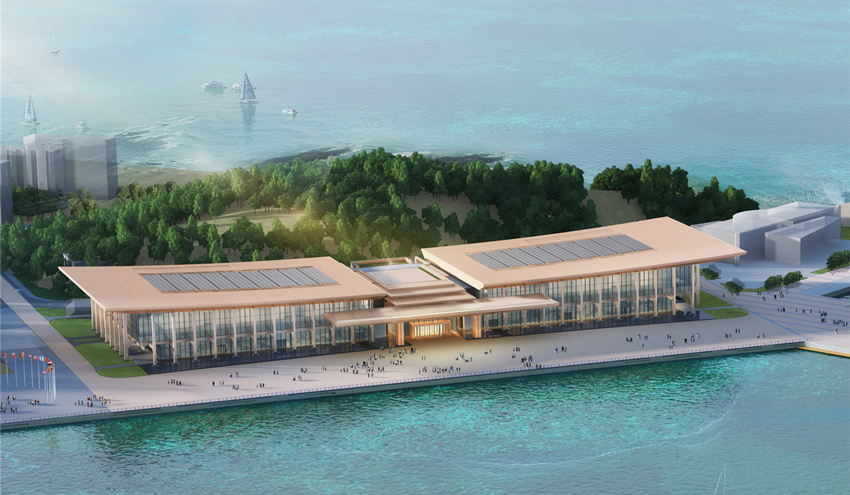 The Qingdao International Convention Center, an architectural work designed by SCUT and the main venue for the 18th Shanghai Cooperation Organization Summit, was the most appealing landscape of the summit that was last week held in Qingdao, Shandong province.
The convention center is a latest accomplishment presented by the team led by Professor He Jingtang, a renowned architect of SCUT who also led the design for the main venue of the Shanghai World Expo 2010.
The 54,000-square-meter building and its surroundings, constructed under a hill on the sea shore of Qingdao, reflects the idea of combining the “Chinese air, the international quality, the Shandong Style, and the Qingdao elements.”
“Architects are supposed to serve the society and take responsibilities,” He Jingtang said in an interview with Guangzhou Daily. “We should actively respond to key events of the country.”
The convention center has attracted attention from major news agencies, including Southern Metropolis Daily and New Express, which both published in-depth stories of the team finishing the project in a short seven-month period with incredible effectiveness and quality, and described the work as “a landmark for history, a name card for the city, and a reception hall for guests.”
Follow this link to view detailed pictures of the architectural work:
https://www.scut.edu.cn/new/2018/0614/c211a9625/page.htm
Source from the University News Center
Translated by Xu Peimu
Edited by Xu Peimu and Cheng Yu
From the SCUT News Network