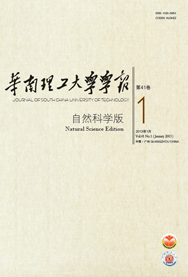 Journal of South China University of Technology (Natural Science Edition), or JSCUT for short, is sponsored by South China University of Technology (SCUT), under the auspices of the Department of Science and Technology, the Ministry of Education of China. Founded in 1957 and originally entitled Journal of South China Institute of Technology, it is a comprehensive academic periodical focusing on science and technology. 29 volumes were published quarterly before 1993, and since 1995 it has been published as a monthly periodical. It is now openly distributed both at home (CN 44-1251/T) and abroad (ISSN 1000-565X).

As a showcase of SCUT's academic achievements, the journal publishes in time high-level papers written by professors and students of SCUT and report their research findings and major academic activities, so as to form close ties between SCUT and other domestic and foreign academic circles.

JSCUT now aims for even higher academic standards and quality. It is hoped that experts and scholars from different parts of the world will render their enthusiastic support to it so as to enhance academic exchanges and foster our common cause of scientific research.