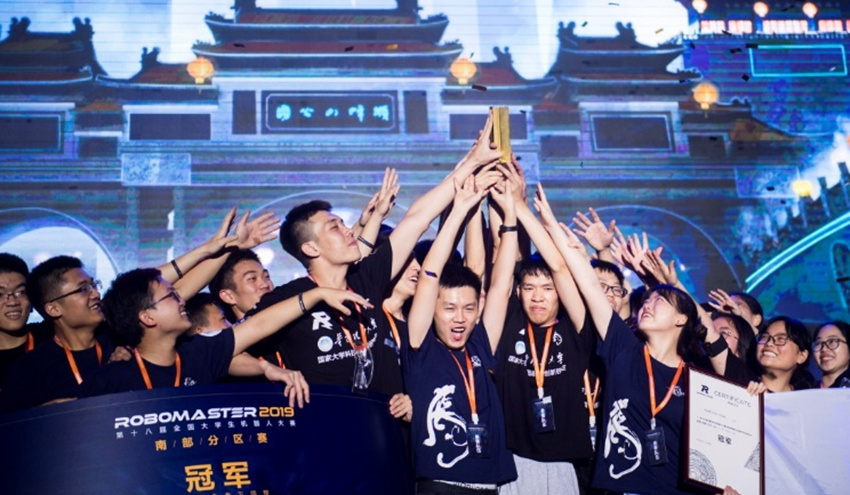 The South China Tigers, a student robotics team of SCUT, won the first place of the South China Region and advanced to the final of Robomaster 2019, a leading global competition that aims to foster innovation and hands-on experience for young engineers in the field of robotics.

From May 16 to 19, 38 teams of the South China Region gathered together in Foshan to fight robotic wars. The Tigers, after crowned the champions of Robomaster Final Tournaments in 2017 and 2018, expectedly finished this year’s regional races with an all-win record.

Their rivals at the final on May 19 were students from the Beijing Institute of Technology, Zhuhai, which also won all the games in previous stages, but were unable to keep the record after the SCUT team demonstrated excellent moving speed and bullet accuracy, as well as a high hit rate of auto-aiming, and claimed a 3:0 victory against them.

The Tigers are now looking at a Triple Crown that can be possibly concluded in this August, Shenzhen, where 32 teams from around the world will battle for the championship of the 2019 Final Tournament.

RoboMaster is jointly organized by the Communist Youth League of China, the All-China Students' Federation and the municipal government of Shenzhen. It is hosted by DJI, the world's leading consumer drone manufacture, and is on its way to be the most influential robotics competition to date.

The event requires students to walk out of the classroom, form a robotics team, and independently develop and produce a variety of robots to participate in a large-scale competition. Participants gain valuable technical skills as well as critical thinking skills throughout the competition.