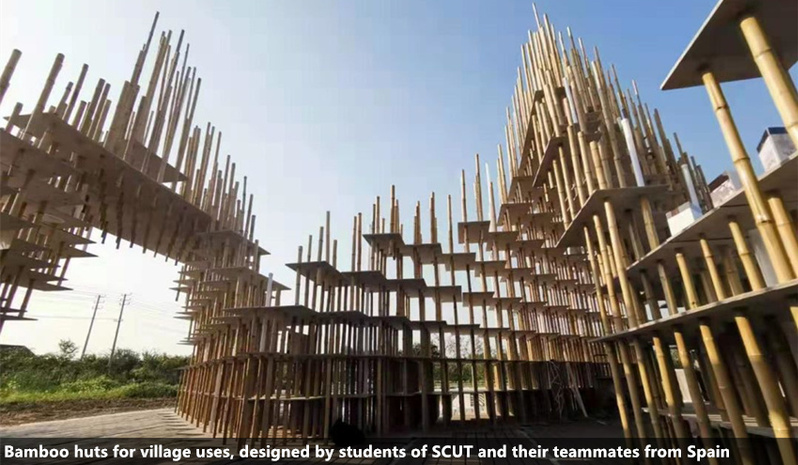 A group of architecture students of SCUT, along with their teammates from the Institute for Advanced Architecture of Catalonia (IAAC), Spain, built a set of bamboo huts for village uses, and were honored as one of the top three winners of the 2019 UIA-CBC International Colleges and Universities Competitive Construction Workshop.

This August, 15 international student teams made their way to Aiyuan, a village known for its century-old pear orchard, in Siyang county, Jiangsu province, to implement designs aimed at improving the quality of life of residents there.

Except for the SCUT + IAAC team, the other two winners of the workshop were the Kunming University of Science and Technology + Slovak University of Technology in Bratislava team, and the Southeast University + Politecnico di Torino team.

The Bamboo Huts, designed by the SCUT + IAAC team were constructed using concrete plates and bamboo to create the image of an old tree in the village, where people would rest and socialize with each other in the past.

The space is designed to host social events for locals like gatherings and dances, or serve as a playground for children. It can also be used for exhibitions and trading. Moreover, the team chose the materials and construction techniques that were easily accessible to villagers. After some basic training, the villagers joined the team and took part in the construction of the huts as well.

The workshop was launched by the International Union of Architects and China Building Center (UIA-CBC). According to the participants, the experience was more than just a design competition.

Konstantinos Kostopoulos, an assistant professor at the National Technical University of Athens whose team worked with the China Academy of Art, wrote a WeChat post before leaving for Athens:

18 tough days in Aiyuan, challenging but absolutely worth the effort! 24 hours later, as I wait to board my flight, I still feel the fatigue and the stress, but I am in peace and contemplating. We received an award but the reception of our project by the Aiyuan people was the greatest reward; the smiles of these kids touched our souls. We made friends, established partnerships, and we leave with our baggage full of memories, experience, and valuable feedback for future endeavors.