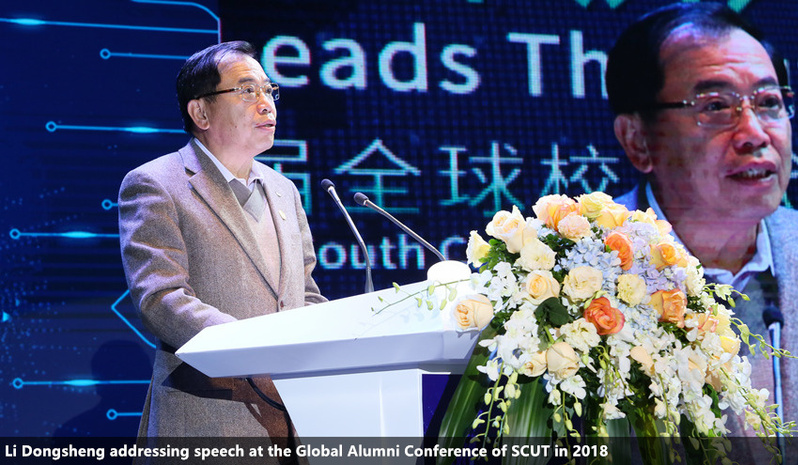 Having graduated from the South China Institute of Technology (present SCUT) in 1982 with a degree in radio wireless technology, Li Dongsheng has led TCL to develop from a small workshop into a multinational conglomerate operating in 160 countries and regions.

He is considered as one of the most outstanding entrepreneurs graduated from SCUT, who have shown unique talent, skills, and vision in industrial development and business management, playing vital roles in China's economic take-off.

SHENZHEN, Sept. 29 (Xinhua) -- For Li Dongsheng, chairman and CEO of Chinese electronics giant TCL Group, innovation has always been at the center of his entrepreneurship and built into the very genes of his company.

Widely regarded as a pioneer in Chinese companies' exploration of overseas markets, he has led TCL to develop from a small workshop into a multinational conglomerate with 89,000 global employees and businesses in 160 countries and regions.

For a company to succeed, it must stick to its competitive advantages, embrace innovation and constantly evolve, said Li.

After graduating from the South China Institute of Technology (present SCUT) in 1982, Li joined TCL's predecessor, TTK Home Appliances Co., Ltd. as a technician. At the time, the firm was only a small workshop producing audiotapes.

The company changed its name to TCL, which stands for Telephone Communications Ltd., in 1985 and switched to the production of telephone sets. In just four years, it became the industry leader in China.

At that time, there were opportunities for almost every business, as long as you weren't afraid to be the first one trying, Li said.

Seizing the opportunity, Li directed TCL into the business of color TV sets in the 1990s while working to transform the company into a modern enterprise.

Among the first group of Chinese entrepreneurs with global vision and ambition, Li made the important decision to establish TCL's first overseas company in Vietnam in 1999. Before long, the company expanded to India, Russia and other countries and regions.

Chinese enterprises must resolutely implement a global strategy when they enter the international market, said Li.

In turn, Li came under the spotlight of the global business world and won a number of honorary titles, including a medal of French National Honor he received in 2004.

Having enjoyed such unprecedented success, Li was unprepared for what came next, as the two overseas deals would push the company to the brink of bankruptcy.

After the acquisitions, TCL was faced with serious challenges in terms of capital, technology and talent reserves as well as understanding of the European market, its law and culture.

We lost 1.8 billion yuan (about 257 million U.S. dollars) in 18 months because of our misjudgment of TV technology, Li said. Twenty years of savings were almost gone in a single business move.

To right the ship, Li sold some high-quality assets of the company and downsized production volume. The painstaking moves effectively reined in the company's continuing losses.

To boost the morale of his employees, Li shared with them the story of an eagle's rebirth.

The story of the eagle tells us that we can only fly again if we dare to face difficulties, take on challenges, develop new abilities and adapt to changes, Li said.

Although we have paid a high price, the decision to go global was the right one. That step was what made the company of today possible. It also proves that Chinese enterprises can be very competitive globally, Li said.

In 2018, 58 percent of TCL's sales revenue came from overseas business, a rare feat for Chinese companies that Li attributes in large part to the foundation laid by the French deals.

In the internet age, Li adopted a dual-track strategy of developing new capabilities through smart transformation while increasing overseas market share through internationalization.

Looking back at TCL's history, Li believes that innovation and a pioneering spirit are what drove the company to become an industry leader.

The advantages of private businesses lie in their high efficiency and ability to adapt to changes, said Li.