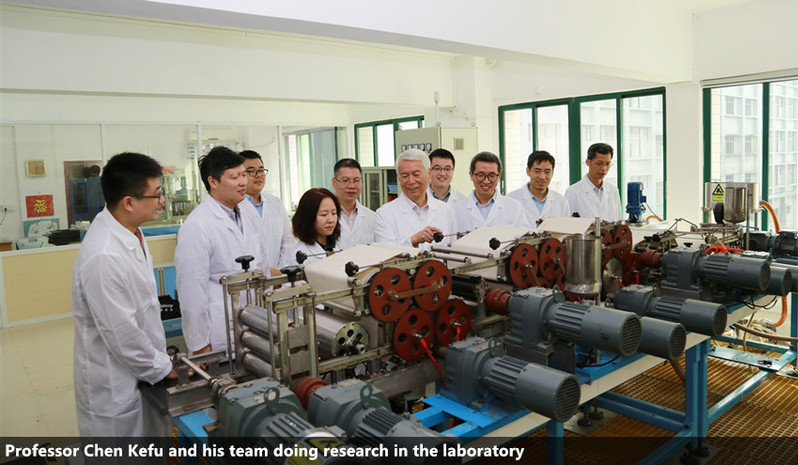 A research project developed by SCUT scientists, for the first time in the university's history, won a First Prize at the 2019 National Science and Technology Awards (NSTA), the highest honor in China's communities of science and technology.

The awarded research, "key technology and its industrialization for clean production of pulp and paper and total process control of water pollution", received the First Prize in the State Science and Technology Progress Awards, which is one of the five sub-categories of the NSTA. It was completed by a SCUT team led by Professor Chen Kefu, a Member of the Chinese Academy of Engineering.

Issued annually by the PRC State Council, the NSTA honors outstanding individuals and organizations for their remarkable contributions to China's scientific and technological progress, economic and social development, and national defense modernization. The awarding ceremony was held at the Great Hall of People, Beijing, on last Friday.

The prize that SCUT scientists brought home this year marked a historical breakthrough both for the university and Guangdong province, since it was the first research program developed by Guangdong universities that ever received a NSTA First Prize.

Paper and pulp manufacturing is a fundamental raw material industry in China. Back in 2011, the country claimed the world’s largest production capacity by producing nearly 100 million tons of paper. However, pollution caused by the industry also raised high alerts by contributing 25% of the waste water and 20% of the chemical oxygen demand (COD) discharged by industries of the whole country.

To solve the issue, Chen Kefu and his teammates spent ten years in developing clean processing techniques that managed to cover the whole manufacturing line of paper and pulp, including chemi-mechanical pulping, chemical pulping, waste paper pulping, and paper making.

Up till now, the team has designed five advanced and reliable systems based upon 10 key technologies and 11 supporting technologies. After being widely used by a dozen of pulp and paper producers at large or medium size in Shandong, Guangdong, Guangxi, Henan, and Hebei, the project has effectively curbed pollution, preserved the environment, and brought significant profit growth for enterprises.

While meeting the latest national standards in clean production, this set of techniques also exceeded EU standards in environmental protection, securing a leading position around the globe with a number of research results that other countries have yet to achieve.

"I am now glad to say this with all confidence: paper-making finally becomes a green industry in our time, and by our hands," said Chen Kefu when he was doing field research at the Sun Paper Group in Shandong province, a major paper producer equipped with production lines based on technology developed by SCUT.

At Sun Paper, his team visited a waste water discharge outlet, where the water was crystal clear and turned out to be a habitat of massive reeds. It was pleasantly surprising when the team found the place was so beautiful that it was actually known by the locals as a scenic spot that attracted many new couples to take wedding photos there.

Chen Kefu said there will be no technological barriers against sharing this research achievement with other enterprises in the industry. The research team is now hopefully looking forward to a common action across the whole paper and pulp industry, which aims to end the label of "heavy pollution", and thus to achieve concrete green development.