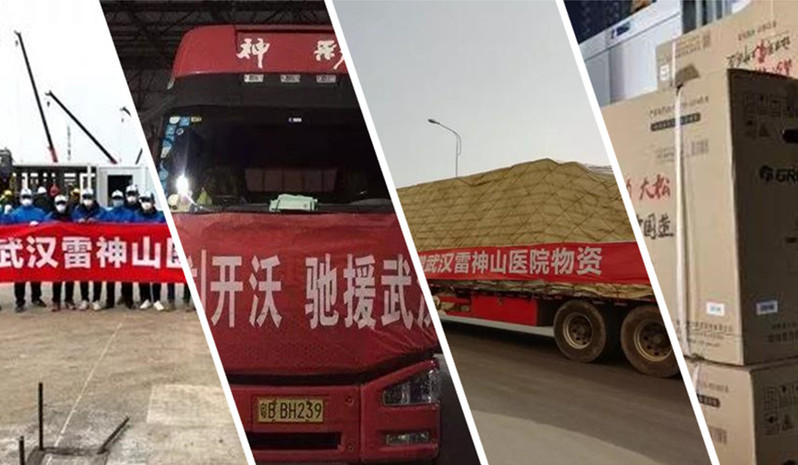 As the battle against the virus outbreak is entering a critical stage, China delivered these two emergency hospitals in less than two weeks, making an “impossible mission” possible. Donations and manpower help were coming from everywhere outside Wuhan, while alumni entrepreneurs of SCUT led people of their companies to join the battlefield. These well-known brands included TCL, Gree, Skyworth, Dongpeng, PAK, EVE, etc.

The TCL Group, in addition to a cash donation of ten million yuan, brought LCD screens, air-conditioners, fridges, and laundry machines to the two newly-built hospitals in Wuhan. Home appliance supplies were also donated to Huanggang, another worst-hit city in Hubei province, which was suffering a critical situation of supply shortage.

Gree, a bellwether of the globe air-conditioner industry, sent an engineering spearhead to Wuhan to install its latest model that showcases cutting-edge technology in two-way ventilation, which was timely and productive to meet the high demands of air exchange and cleaning in emergency hospitals.

Television and air-cleaning equipment as well came from the Skyworth Group to Huoshenshan and Leishenshan. Voice-control modules were installed in these televisions, which are essential tools for remote monitoring and dialogues, effectively reducing the infection risk for medical staff when communicating with patients.

Sanitary equipment produced by Dongpeng Holdings was sent from its warehouses outside Hubei province. For years, the brand was known for its reputation in providing people with healthy, green, and customized solutions. He Xinming, President of Dongpeng and an alumnus of SCUT, himself oversaw the aiding program, which only took 26 hours before the first shipment left for Leishenshan.

And alumni enterprises of SCUT did not just bring supplies, but also life-saving time. Their expertise and professional quality enabled them to respond quickly. Before the construction of the Huoshenshan Hospital was finished, lighting equipment produced by Guangzhou PAK and its engineering team already arrived. The company, after learning about the Huoshenshan program, lost no time in contacting the constructor and offering help, and then designed customized products for hospital uses in a very short time.

On January 26, the construction of two new base stations for mobile communication at the Huoshenshan Hospital were completed, but these 5G cell towers could not function due to that the power supply connected to the main network of the city was temporarily not available. That was when EVE Energy received an emergency request, and then quickly fixed the problem to ensure the towers to be delivered for use on the next morning.

Since SCUT was founded, entrepreneurship has established a long tradition on its graduates, who have made major contributions to the economic take-offs in the Pearl River Delta and South China during the last four decades. There are great number of large enterprises across the country being started or steered by alumni of SCUT.

And now they converge on Wuhan, with cash donations, emergency supplies, skillful people, and some of the most advanced equipment and technology. From home appliances to air-quality control equipment, and from lighting to 5G network, their marks are left at every corner on the frontline of life-saving campaigns to help the nation and people, as they always did.