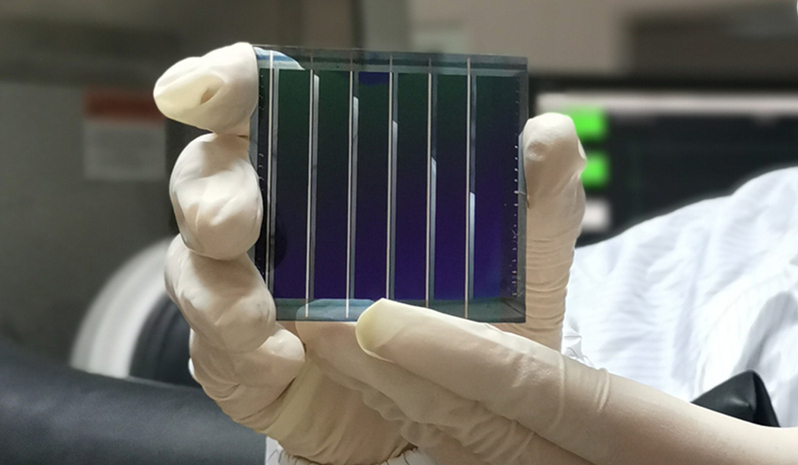 A group of scientists from SCUT has created an organic solar module with an area of 18 cm2 and an efficiency of 14.4%.

Described in the study "Single-Component Non-halogen Solvent-Processed High-Performance Organic Solar Cell Module with Efficiency over 14%", published in Joule, the device is based on a non-fullerene acceptor called DTY6, which is a derivative of the Y6 non-fullerene acceptor that is widely used in research on organic solar cells.

The acceptor was synthetized with long-branched alkyl chains. Alkyl chains are molecules that contain only carbon and hydrogen atoms and exhibit strong and broad absorption, low band gaps and high electron mobility. These are also widely applied in developing high-efficient organic solar cells.

According to the academics, an unnamed third-party accredited institute has certified an efficiency of 13.98% and, when a non-halogen solvent was used, it even reached 16.1%.

The mini panel is said to have a larger area compared to conventional organic spin-coated devices. The research group stressed that the big challenge of creating larger panels was transferring the optimized materials and processing condition of spin-coated, high-efficiency, small-area devices into printed large-area modules due to the different film-forming manner.

They further explained that the DTY6 showed good solubility in commonly used halogen and non-halogen solvent. “The aggregation of DTY6 was also effectively suppressed in comparison with Y6 when processed with a high boiling point solvent,” they added. The aforementioned highest efficiency was achieved when the module was processed from solvents such as chloroform (CF) and o-xylene (XY). “More interestingly, these high-efficiency OSCs were obtained in the absence of solvent additives,” the group stressed.

How non-fullerene, small-molecule acceptors (NAFs) work in organic solar cells at the molecular level remains a mystery, according to a recent study from the Georgia Institute of Technology. The researchers claimed that small modifications at the molecular level in common NFAs could improve cell performance. “In particular, functional groups introduced at the SMA edges allow the fine tuning of the electronic and morphological properties of the blends,” they said, noting that it was still experimentally difficult to characterize the impact of the precise substitution positions at the molecular scale in a common NFA electron donor/acceptor pairing.

Researchers at the Ulsan Institute of Science and Technology (UNIST) reached 12.01% efficiency on an organic solar cell (OSC) based on non-fullerene acceptors in September 2018. Two months later, a team of scientists at the Friedrich-Alexander Universität Erlangen Nürnberg (FAU), in Germany – working with SCUT– demonstrated further progress with the technology, achieving a record efficiency of 12.25% for an organic, non-fullerene based single-junction PV cell.

In April 2018, University of Michigan scientists demonstrated an organic solar cell with 15% efficiency.