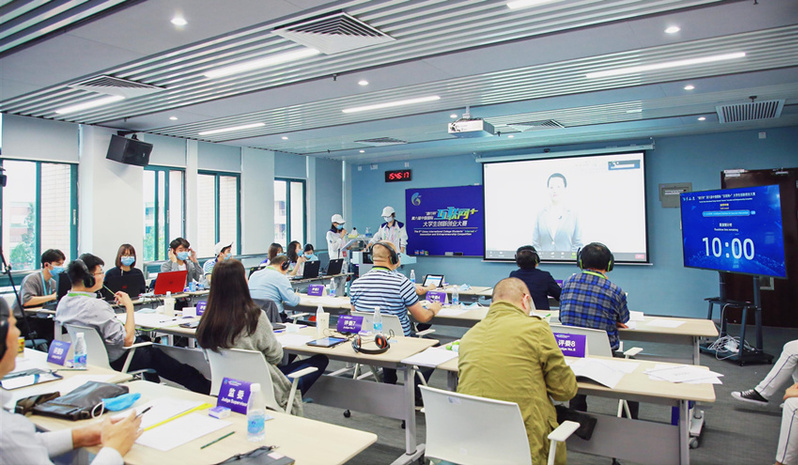 The finals of the 6th China International College Students' "Internet+" Innovation and Entrepreneurship Competition opened on November 17 at the University Town Campus of SCUT.

A total of 513 entry projects entered the finals, while 299 of them, including 112 projects submitted by teams from universities outside China, were registered in the Higher Education Track. The other 214 projects participated in the Vocational Education Track and the other two tracks.

During the finals, a series of concurrent events were held to promote exchanges and cooperation in technology and humanities. These events included the Resource Exchange Networking Sessions, the Innovation and Entrepreneurship Exhibition for College Students, the World Forum on Higher Education in Global Areas, the World Forum of Unicorn Companies, and the Dialogues with Global Young Scholars.

This year's competition, launched in June 2020, has attracted 6.31 million entrants from China and abroad. There are 1.47 million projects developed by teams from 4,186 universities and colleges in 117 countries and regions. Students from nearly half of the world's top 100 universities such as University of Oxford, Harvard University, Munich University of Technology, Moscow Baumann State Technical University, etc., signed up for this competition.

Some teams were not able to attend the finals on-site due to the COVID-19 pandemic. To solve this problem, the committee of the competition decided to introduce a new mode of competing. With the aid of internet, the finals proceeds in both on-site and online venues, enabling students from across the globe to compete and connect in the same arena, and thus presents a grand gathering of entrepreneurship and innovation for youth worldwide.