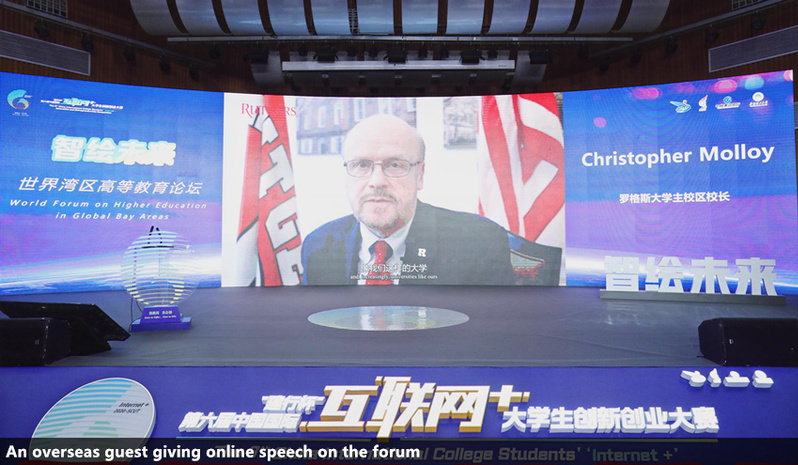 The World Forum on Higher Education in Global Bay Areas was held at the University Town Campus of SCUT on this Tuesday. The forum, bringing together representatives of government, education and industry from the four bay areas of the world, was broadcast live across the globe.

By contributing ideas for higher education and technological innovation in the future world, the forum aims to explore new modes of development for regional higher education, and build bridges to facilitate resource sharing among universities in bay areas and industry-education collaboration.

David Haubert, Mayor of Dublin, U.S., introduced the government’s initiatives to promote educational development and technological innovation in the San Francisco Bay Area; Michael Brown, Provost of the University of California, introduced the successful experience in innovation and entrepreneurship at his university; Okimura Kazuki, ex-President of the Japan Science and Technology Agency, shared his experience and achievements gained from exchanges in science, education and culture between China and Japan; Gao Song, President of South China University of Technology, introduced the features and advantages of fostering talents for the future, guided by the thought of internationalization with local orientation.

The guests of the forum believed that higher education is an important merging point of science and technology, human resources, and innovation. As a new round of scientific and technological revolution and industrial transformation is sweeping the world, it will be a common mission for governments, universities, and communities to make the most of the geographic advantages of bay areas, and thus create international clusters of higher education at new heights, explore new patterns of cooperation and resource sharing in regional higher education, bring into play the agglomeration-spillover effects of higher education systems, as well as support and promote the development of industrial systems and regional economies.

The forum, as part of the 6th China International College Students’ “Internet+” Innovation and Entrepreneurship Competition, was one of the concurrent events held during the competition to promote exchanges and cooperation in technology and humanities.